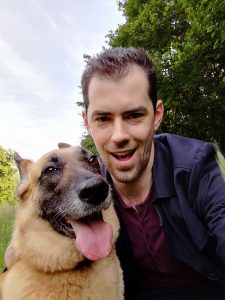 What is your name and what do you do?

My name is Robin. I study Data science here in Maastricht.

Since when are you a member of Kinran?

As a long-term member of Kinran what motivated you to join /and stay?

Mostly the people. As someone who has had the chance to be part of multiple Karate Associations in various places over the past few years it was mostly the other students at Kinran that I trained with and how they interacted with the trainers that made being part of the association so enjoyable.
Having met trainers and students that take themselves way to serious at other associations it was refreshing to see a disciplined and hardworking group that is still able to engage in occasional banter during training.
And certainly getting to know people that are willing to either take or deliver a good punch was reassuring in terms of the quality of training that Kinran delivers.

How do you feel Kinran has developed over time and do you agree with this development?

It certainly has matured. And a growth-process like this always comes with improvements and drawback alike, but one of the biggest improvements was certainly the addition of the Arnold Wakker as Trainer. He joined the Association after I had been a member for 1 ½ years and he definitely made it tougher and therefore (I would argue) more enjoyable.
As another plus the recent two boards have done their best to be as much in touch with their members as possible, which is deeply appreciated.

What is Karate to you?

A combination of control, self-expression and mutual respect.
Good training is demanding, and it pushes you to your boundaries. It’s a good way to grow as a person and put yourself and your values into perspective.
It’s a rewarding experience when techniques can be executed precisely in a relaxed yet controlled manner with the right amount of force. Achieving this can be harder or easier for some, but for me it was always a rewarding experience.

What is Kinran to you?

An association that equally balances the interest of its members and its dedication to Karate.
There is a lot of respect between members but also a lot of appreciation that we still express even if a punch sometimes connects a bit too well with someone else’s face.

Being part of the association has always been a pleasure even during times of disagreement.
Altogether the association has improved immensely since I joined which can only be attributed to both the boards for putting a lot of effort into improving the structure of the association as well as Arnold for being an amazing and demanding trainer that always pushes his students to explore and further improve their limits.